In this episode, I introduce Nearchus’ early life and voyage with Alexander’s troops into India, and look at the various exchanges which took place between the Meditteranean world and the Indian subcontinent as a result of Alexander’s military forays. The episode ends with Alexander agreeing to his troops’ demands to return to Macedon, and his appointment of Nearchus as admiral to lead a fleet down the Indian ocean and back into Mesopotamia

The so-called “Triumph of Dionysus in India” was one of the favorite themes to represent the god, all the way from the early Hellenistic age to the late Roman age.
This is a 3rd century Roman mosaic, found in modern-day Tunisia, that shows this motif in beautiful details. In particular, we can note the cymbals that Dionysus’s follower (a “bacchanal”) is holding, which are an instrument that the Greeks believed the god taught the Indians how to play. In addition, we can see that Dionysus’s chariot is being pulled by 4 tigers, instead of 4 horses. The Mediterranean world had no idea of the existence of tigers before its encounter with India, and they remained an incredibly mysterious and magical animal in the Greek and Roman imagination. 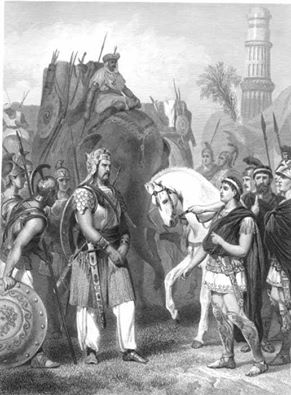 So, why was this episode so difficult?

Well, for some reason, the story of Nearchus, in which we will really sink our teeth in the next episode, has largely been overlooked by modern historians. Apart from a few short summaries of his adventures and life, I could find almost no secondary sources about the man.
Instead, I had to rely almost solely on primary sources (I made heavy use of Arrian and Strabo), as well as on Google Maps to try and find the various locations that he visited. In addition to this being particularly time-consuming, I decided about 10 days ago that context for Nearchus’ journey down the Indus would first be necessary, not only to give a third dimension to the story, but also to explain the mental map that he likely had as he set out with his fleet. Hence, the episode that you have before you today.
I apologize if it is not as “narrative” as I usually aim for my episodes to be. I do hope, however, that you found the connection between Dionysus and India interesting, and that this “first parter” has whetted your appetite for the truly epic adventures that are to come next episode!
Here is a 19th century engraving of the surrender of the Indian Raja Porus to Alexander, after the battle of the Hydaspes. This was Alexander’s last major battle in his life, and it set the stage for his army’s refusal to continue their march into the Indian subcontinent, as well as for Alexander’s decision to appoint Nearchus in command of his fleet.