In this last part of our 4-part series looking at Nearchus’ adventures in India and in the Indian Ocean, we follow the navigator and his fleet along the coast of Gedrosia as he meets with near-disaster on more than one occasion, and finally arrives to meet Alexander in Hoermozia, along the strait of Hormuz.

Episode 4D: Compare the two world maps below. The one on top is the world map according to Herodotus, which we have become quite familiar with over the past few episodes. This is, essentially, the mental picture of the world which both Pytheas and Nearchus would have had in 330 BCE. Note that the entirety of northern Europe is unexplored, and the east stops at the Indus River, which had been explored by Skylax of Caryanda.

Now, look at the map on the bottom. This one was elaborated by Erathostenes of Cyrene in the 3rd century BCE, after Pytheas and Alexander’s discoveries. We can see the newly discovered island of “Brettania” in the north, the adjoining island of Hierne (Ireland), and even a small dot representing “Thule” in the north!

In the east, meanwhile, we see Gedrosia, with the “Ichthyophagi” (fish eaters!) longing the coast, and the more prosperous land of “Carmania” adjoining the Persian gulf.

Finally, we see the island of “Taprobane” (Sri Lanka), which was probably first mentioned in writing by Onesiscritus (emphasis on “probably”), even though the Greeks and Macedonians never travelled there.

Almost all of the discoveries between the first and second world maps were made in the short decade between 330 and 320 BCE, by Pytheas and Alexander the Great’s army!

Episode 4D: Nearchus is seen here leading his fleet against the “monsters of the deep.” 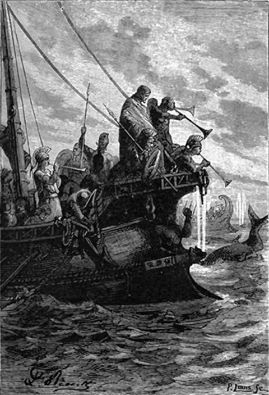 Episode 4D: The inimitable Map Guy Chris Swanson comes through again! This time, with a map detailing the second half of Nearchus’ journey, until his encounter with Alexander at Hoermozia. Again, to my knowledge, this is the only extant map of Nearchus’ journey made in roughly 80 years. Despite my research efforts, I could find none that dated to before World War II.

We may only be a small history podcast, but again, I think we are still doing some pretty cool things.