We begin in 500 BCE in order to set the stage for the coming voyages of the early Mediterranean explorers, as well as take a look at Necho II’s reported expedition to circumnagivate Africa.

A statue of Egyptian Pharaoh Necho II, who launched the Phoenician expedition to circumnavigate Libya (Africa).

This is Anaximander’s world map, showing the 3 continents and the “outer ocean” which he believed encircled the world until it reached the void. Anaximander believed the world was slightly concave, like the shape of a contact lens. 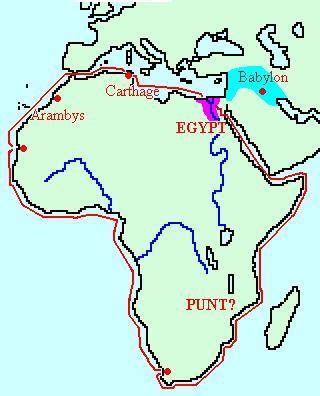 This is a highly speculative rendering of Necho II’s possible Africa expedition. We should note here that Punt is placed significantly farther south than most historians place it, and that the map-maker has placed the location of the Phoenicians’ first major halt at Saint Helena Bay.